WE HAVE AN UPDATED AND MORE VISUALLY APPEALING LOCATION WE ARE NOW POSTING TO AT THE FOLLOWING LINK:
http://stokedbackwoods.weebly.com/


On August 28th, 2014 some friends and I headed out to the East side of Lake Winnipeg for a four day trip down the Manigotagan River from Caribou Landing to the town of Manigotagan. The trip started in Pine Falls, we took the hydro dam across the Winnipeg River. From there we drove to the town of Manigotagan were we picked up Charles Simard. He would be running shuttle for us. Finally we hit the turnoff to the put in some time after Manigotagan. It was a 16km long road. It was rough and often too narrow for two vehicles to pass. 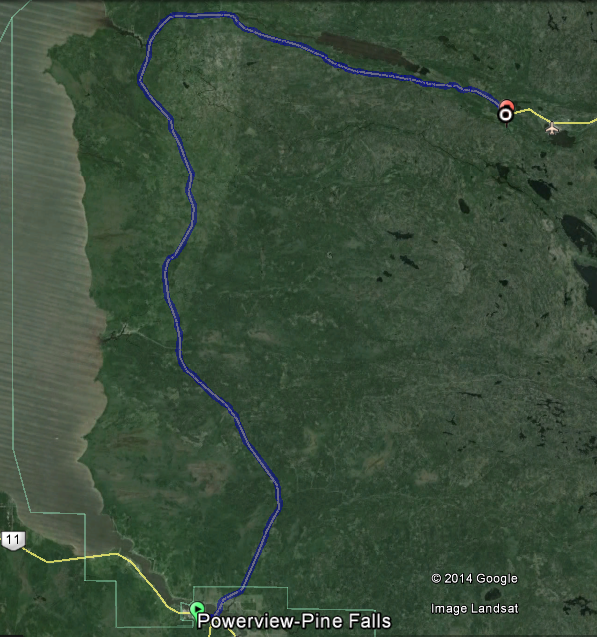 Road to the turnoff, put in south of marker.

We arrived at the put in at Caribou Landing and we were off. Two canoes, and three kayaks were starting on one of the best rivers in Eastern Manitoba. 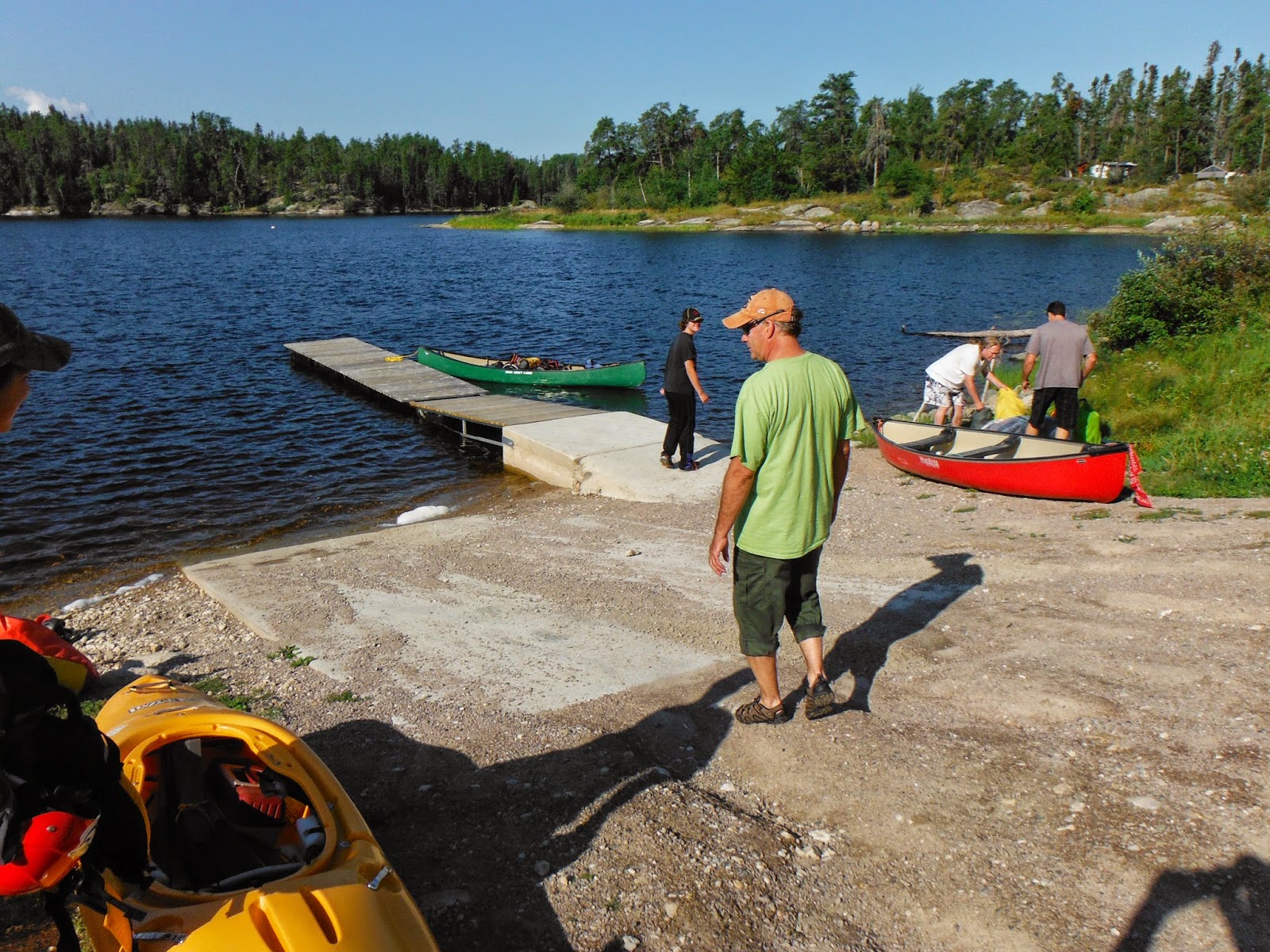 The next portage was only a few hundred feet downstream, it passed the un-runnable Quesnel Lake Dam. Not a hard portage by any standards, we were done with it in under 15 minutes. 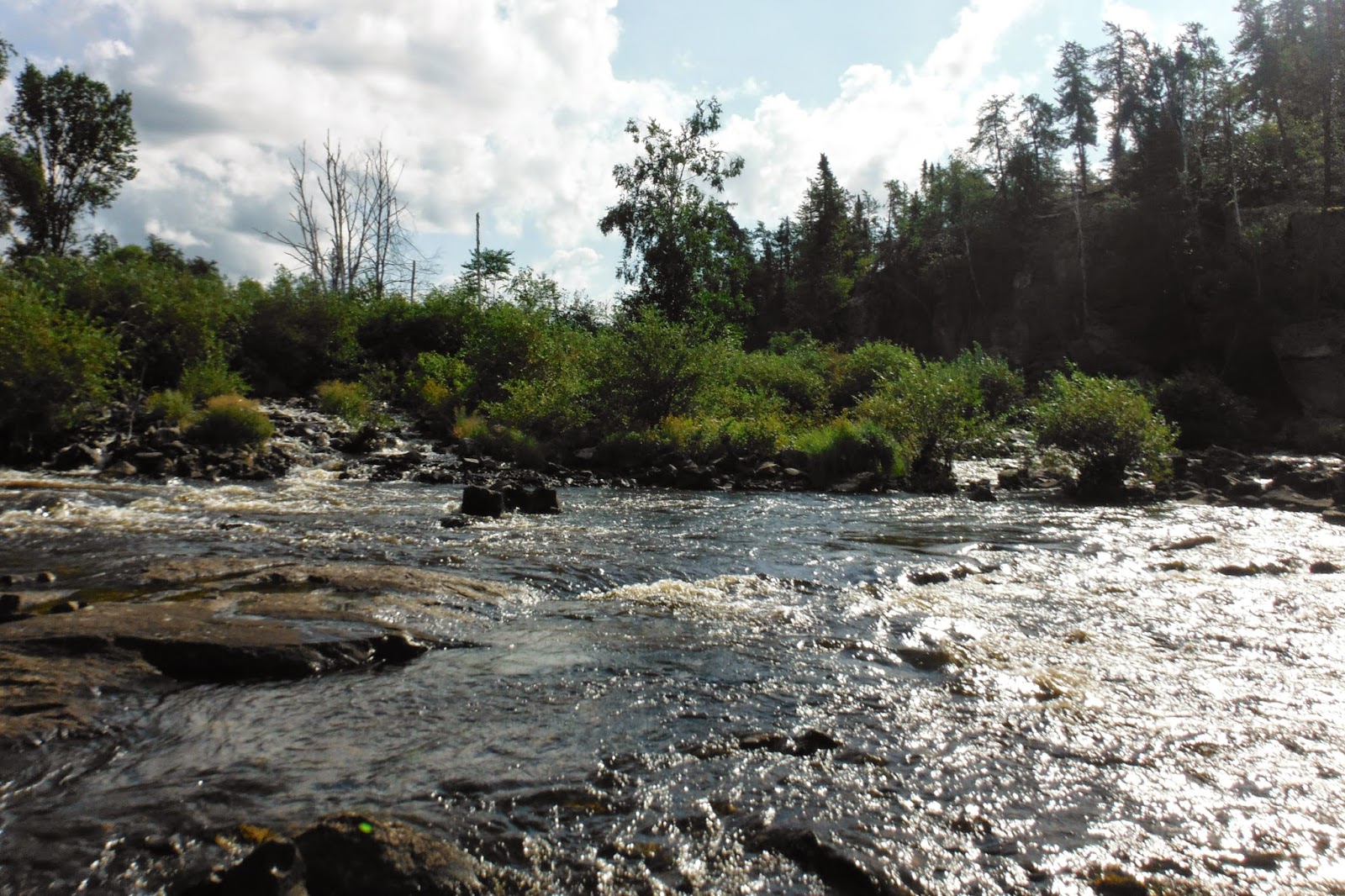 Bottom of the dam, definitely not class V at 8 cms.

Duncan rapids was next, on the map it said it was rated class III but it looked more like a waterfall to me. A whitewater kayak would be able to run it during higher water but it would definitely be a tough one in a canoe. 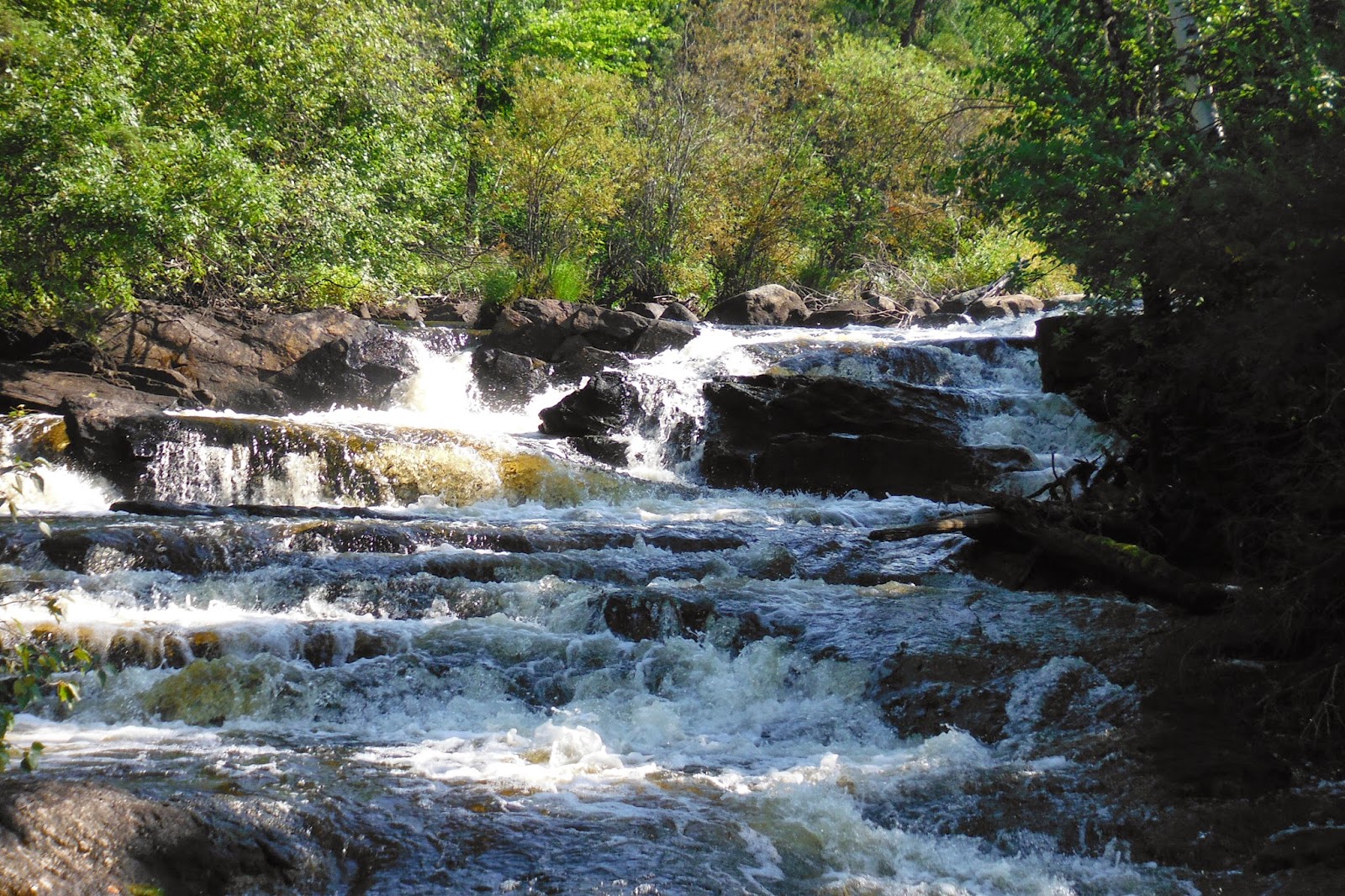 The next rapid we hit was Elbow. Essentially it was a straight shoot, with a hydraulic in the middle we dubbed Carl's Hole. One of my buddies missed the line and ended up backwards in it. We had a good laugh as we rushed to pick up his gear which was floating downstream. 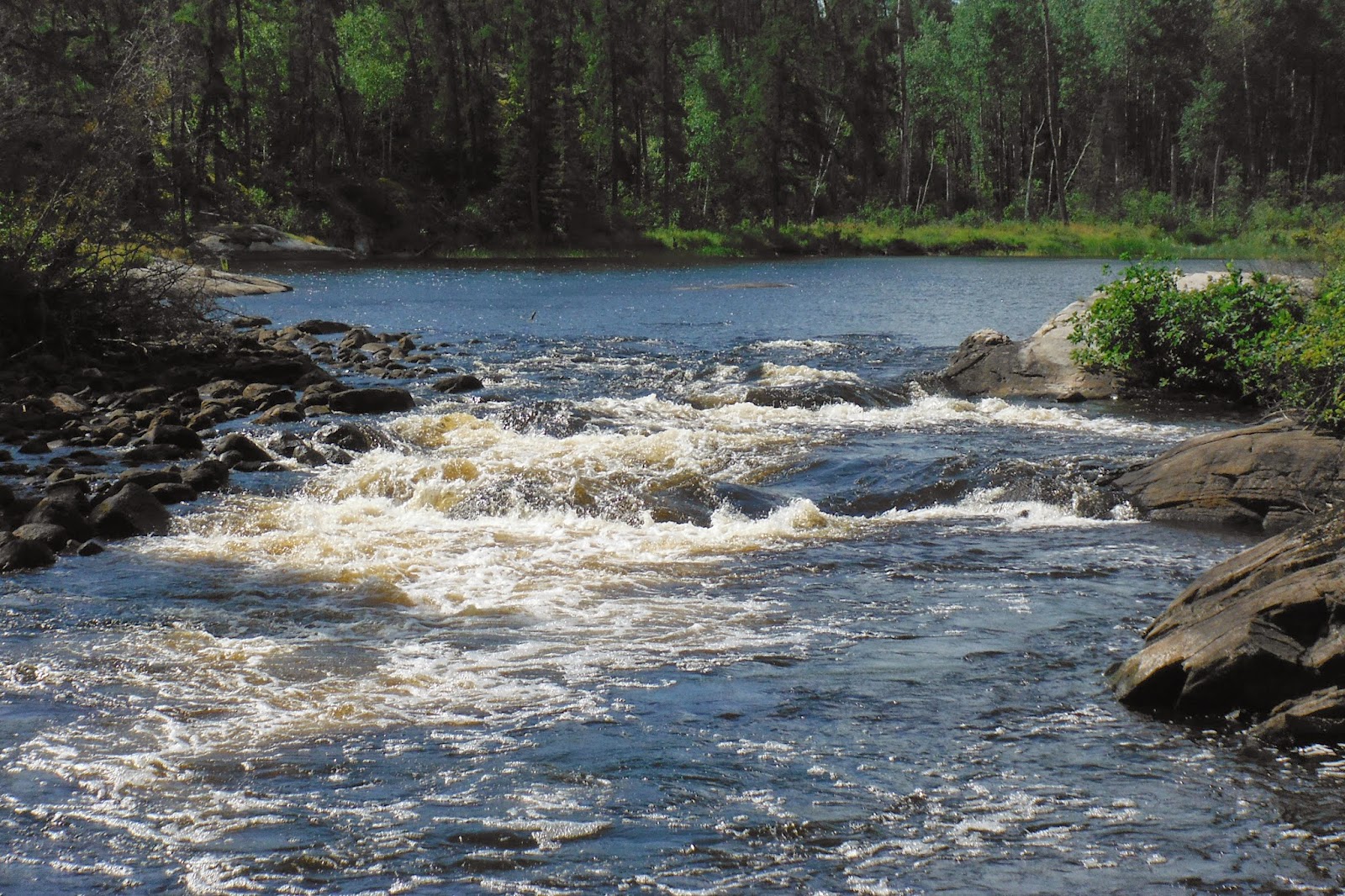 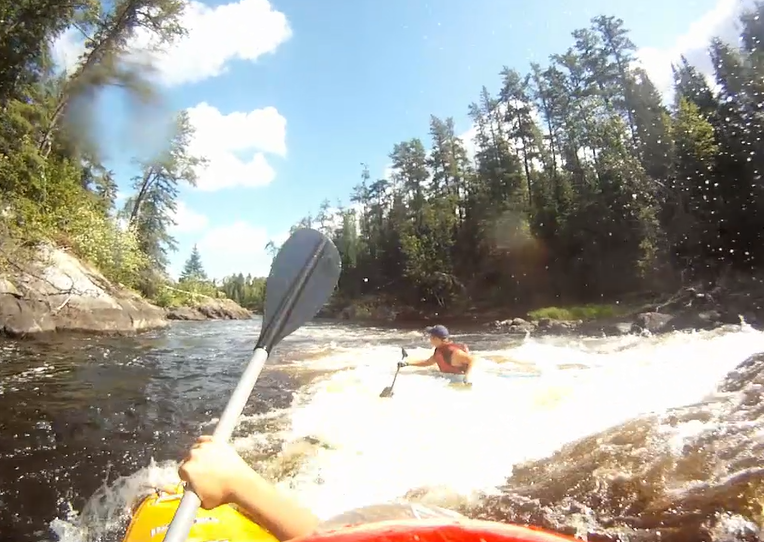 Wendigo rapids was just downstream. It is actually 2 sets of rapids. The first one was very easy, the second set, not so much. Some of the guys decided to take the 400 meter portage around both, some lined the first set, and one ran them. 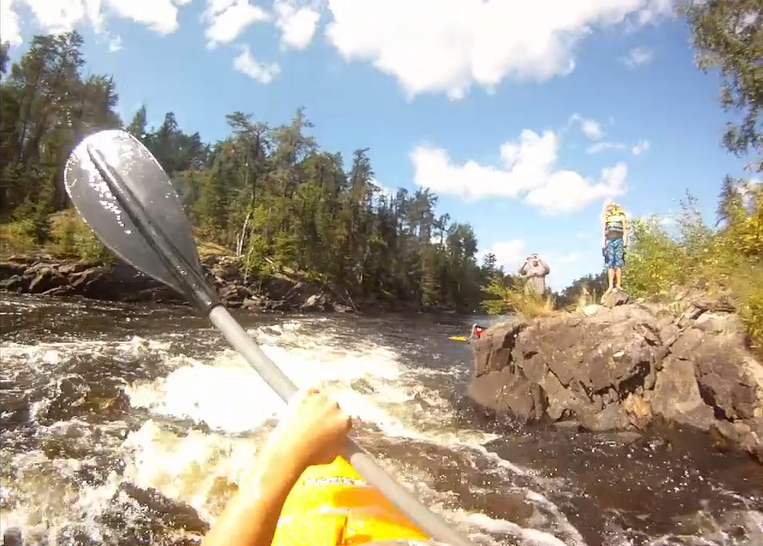 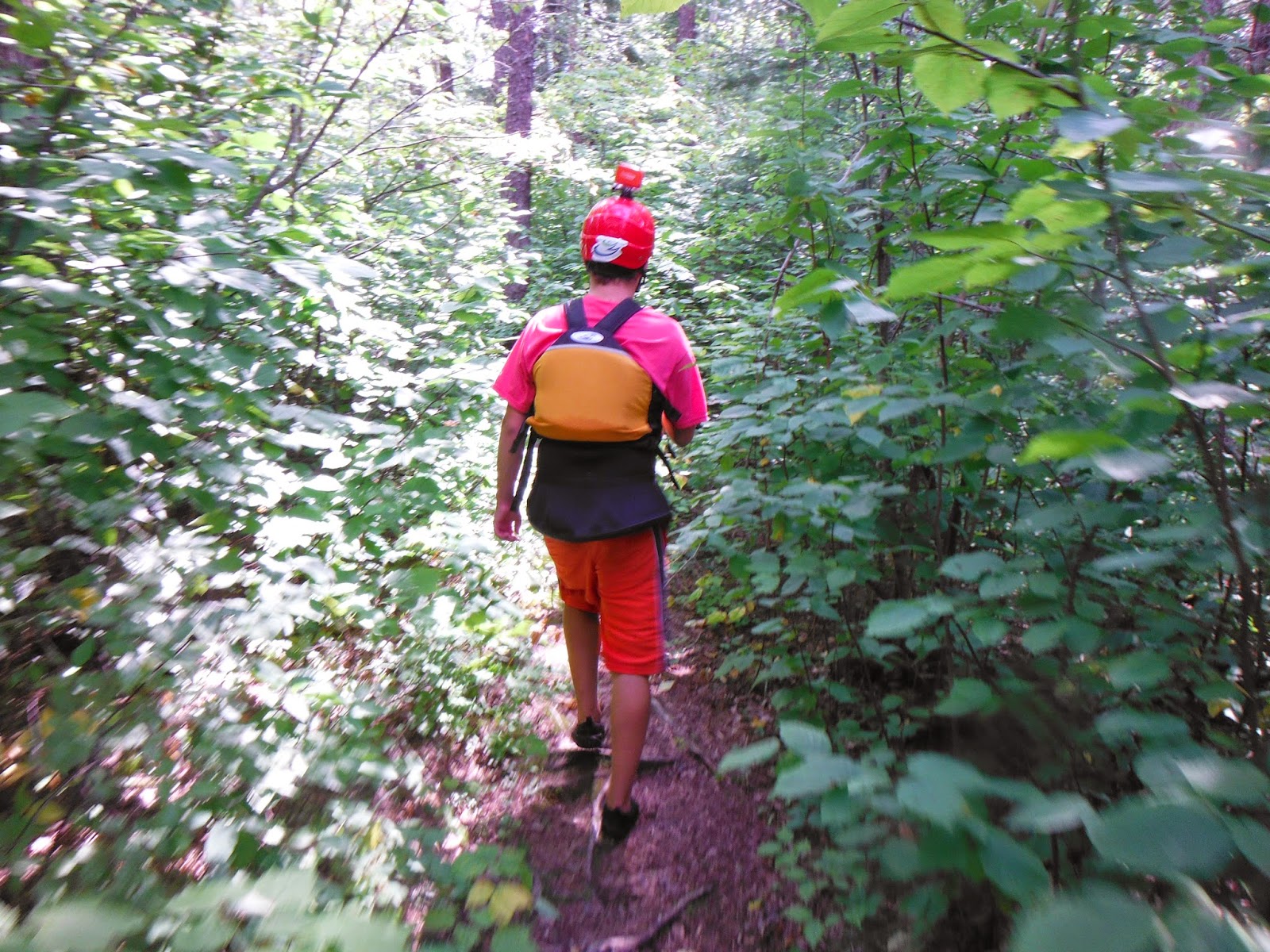 Author on his way to scout the second set. 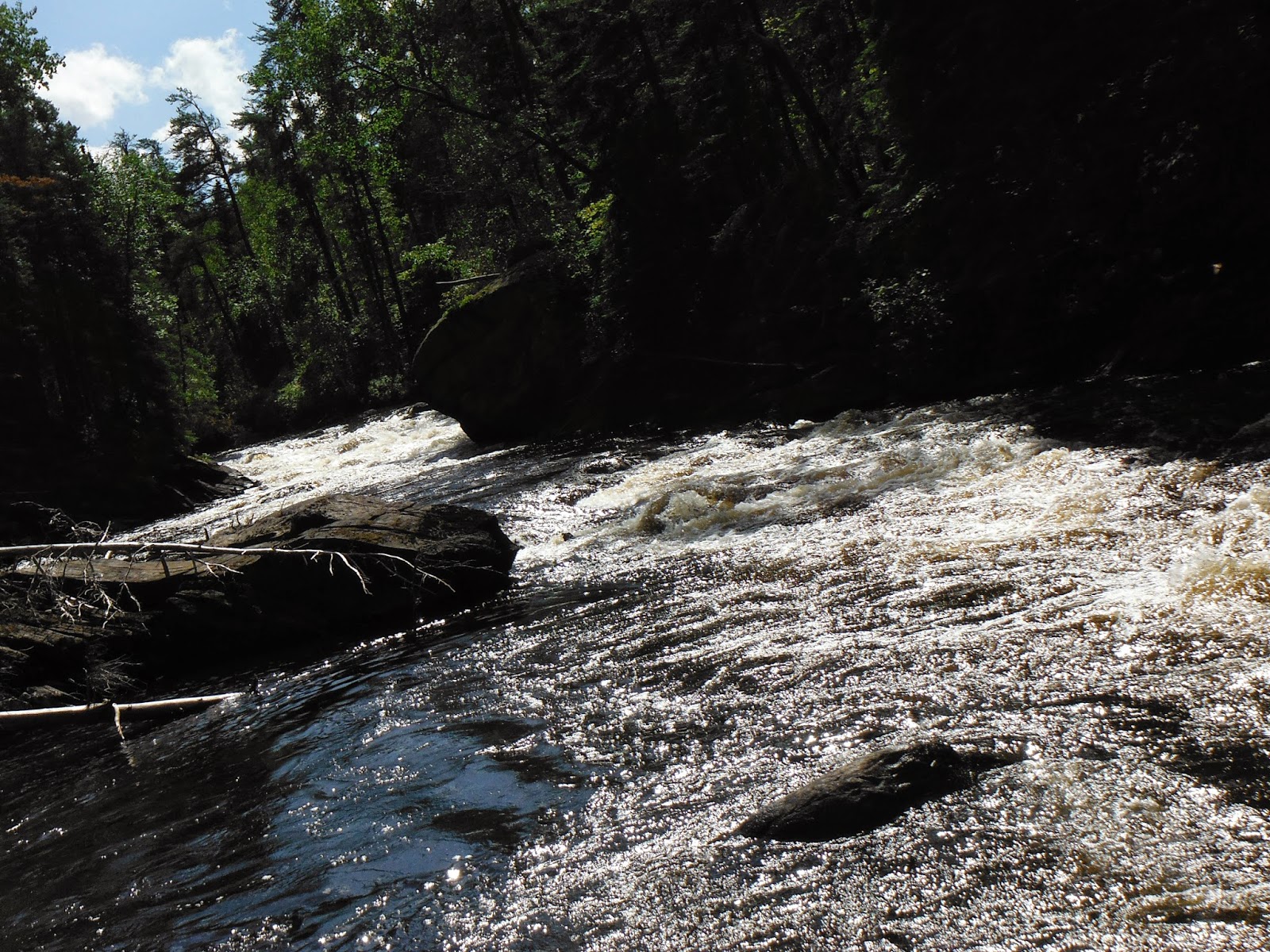 After a relaxing 11 km long day of paddling we made it to the first camp at Turtle Falls. We had to get everything unpacked and had to set up camp, but first, like any whitewater kayaker would, I went to scout the falls. I concluded that I would run the second half of the falls, starting just below a sieve. 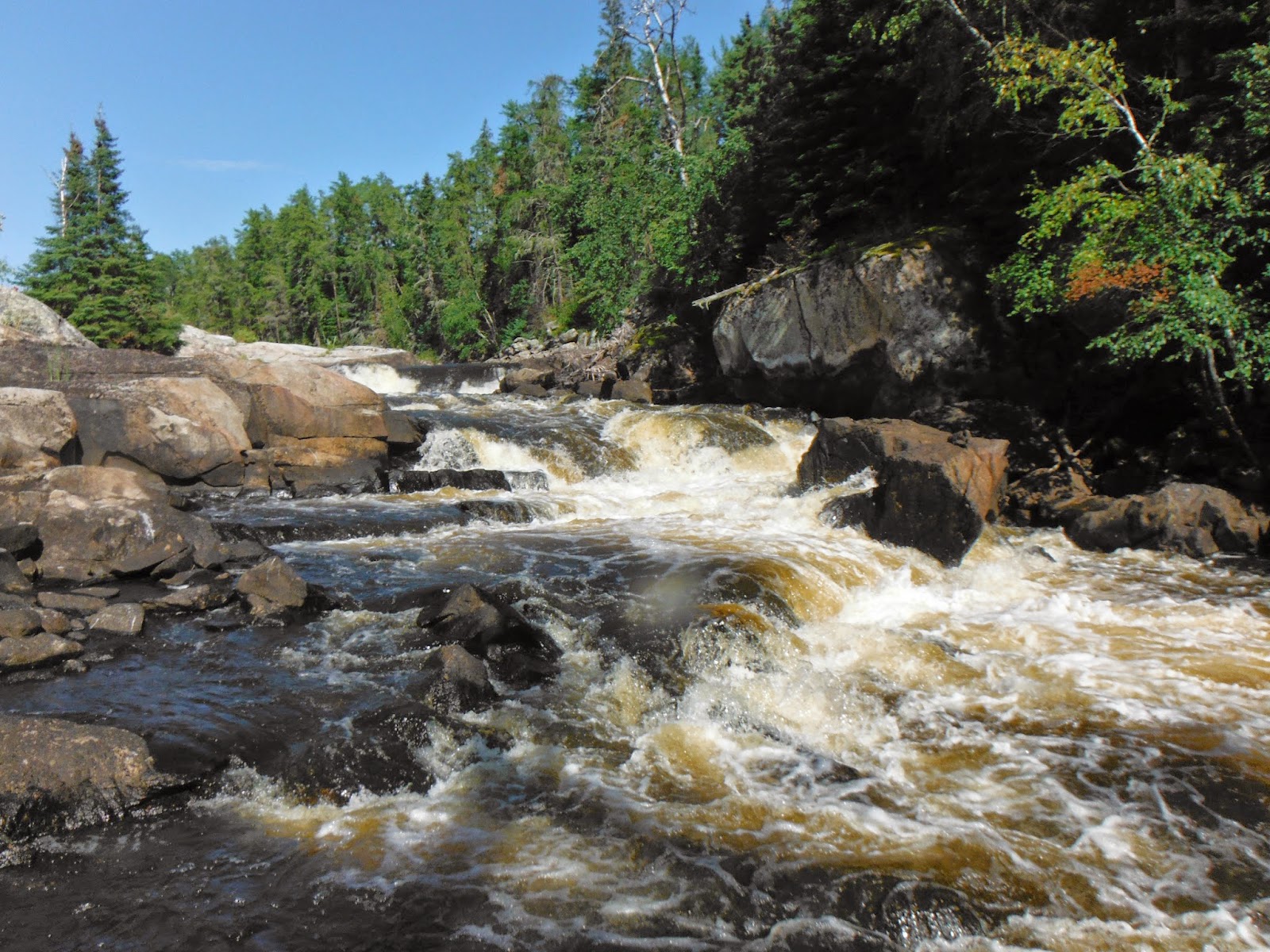 Upper half of the falls and the start of the second half. 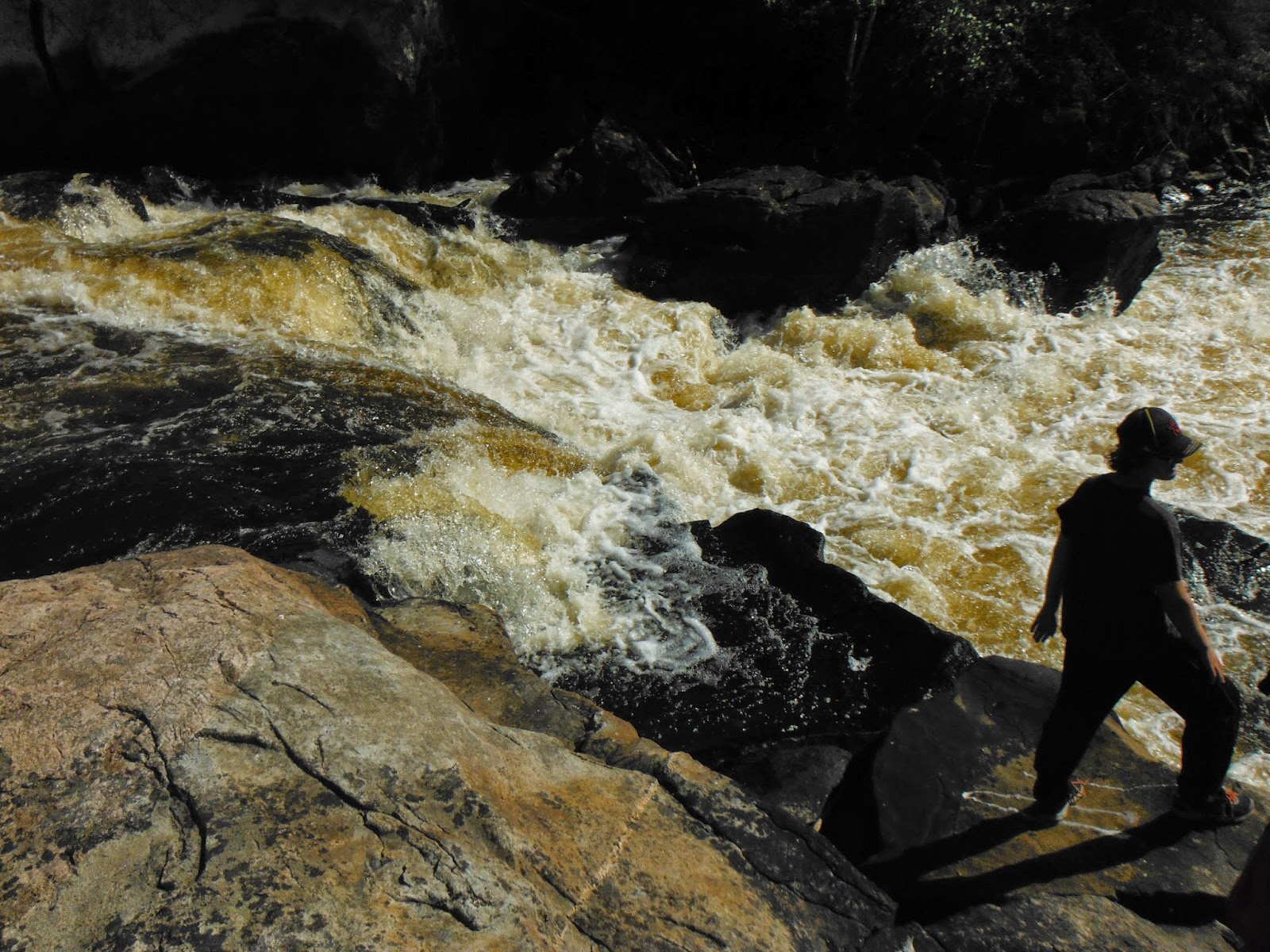 Picture of the sieve don't know if I would have gotten pushed in and pinned so I decided to not run it. 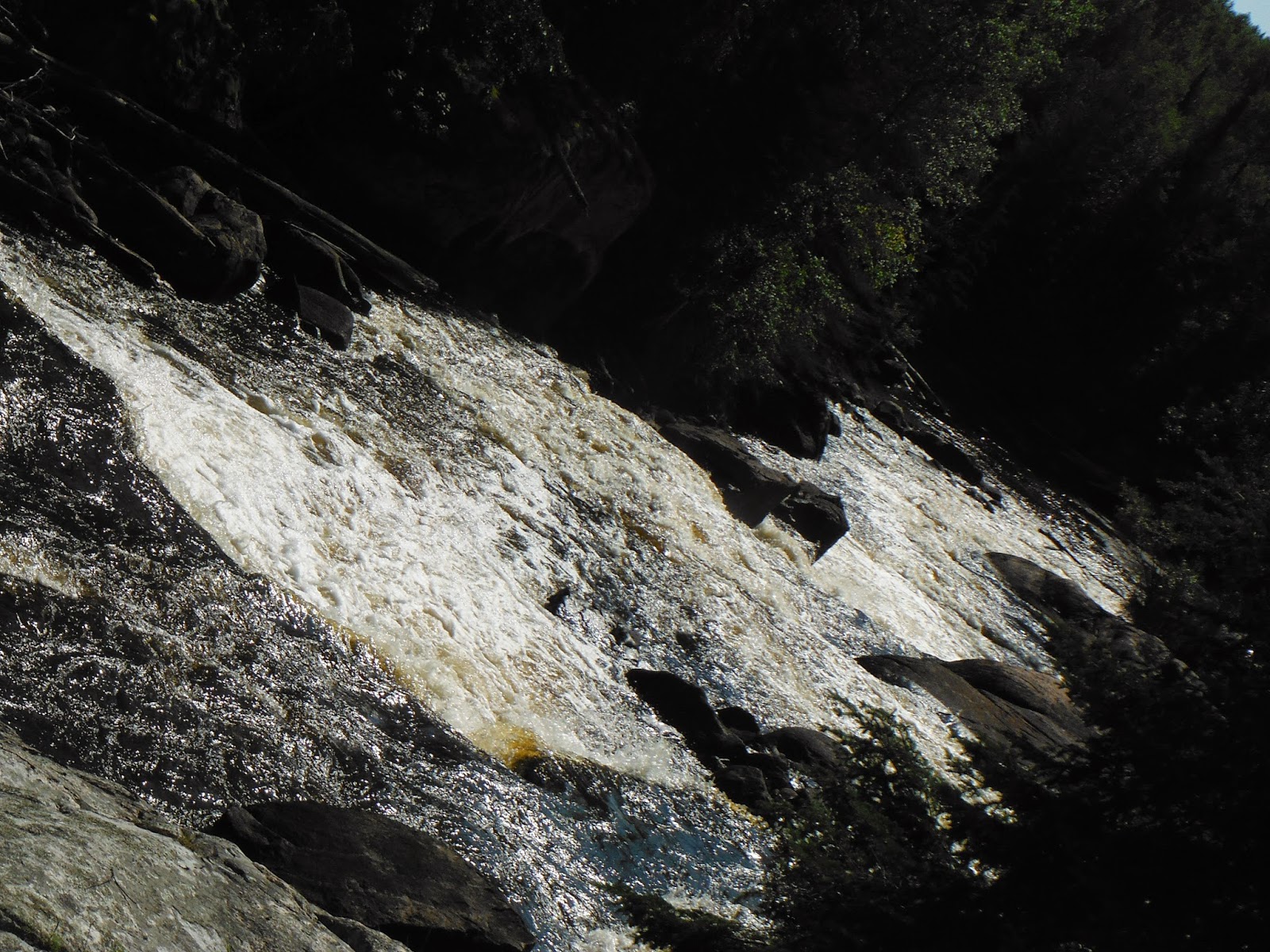 Top/bottom of the falls.

I ran them, and we got camp set up, went fishing at the bottom of the falls, and swimming in a little swimming hole we found in the falls. 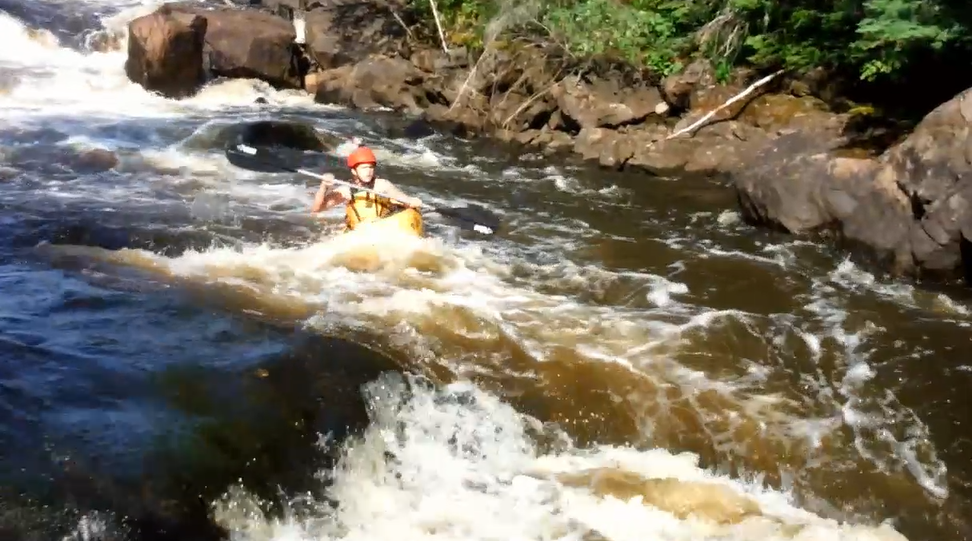 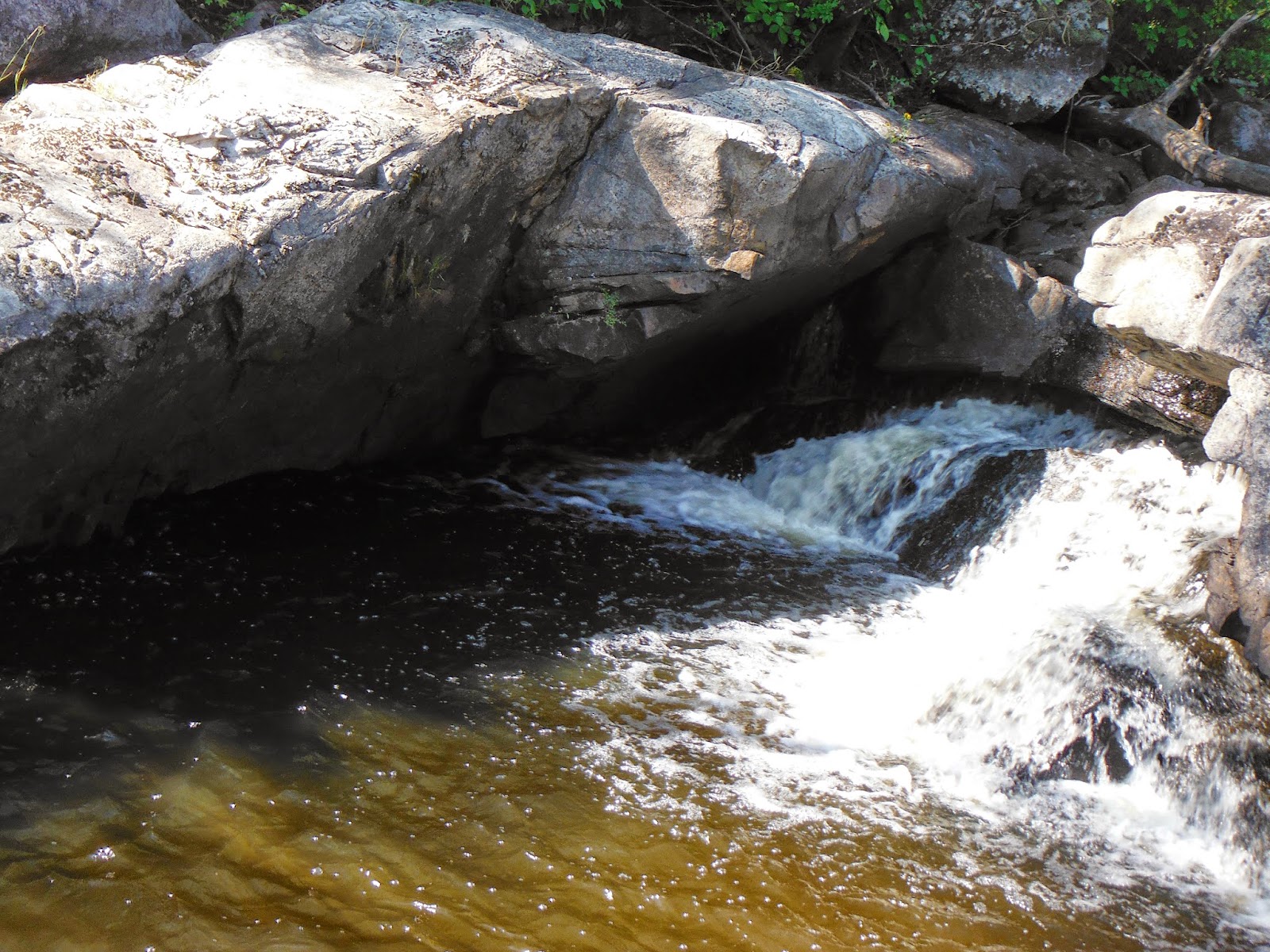 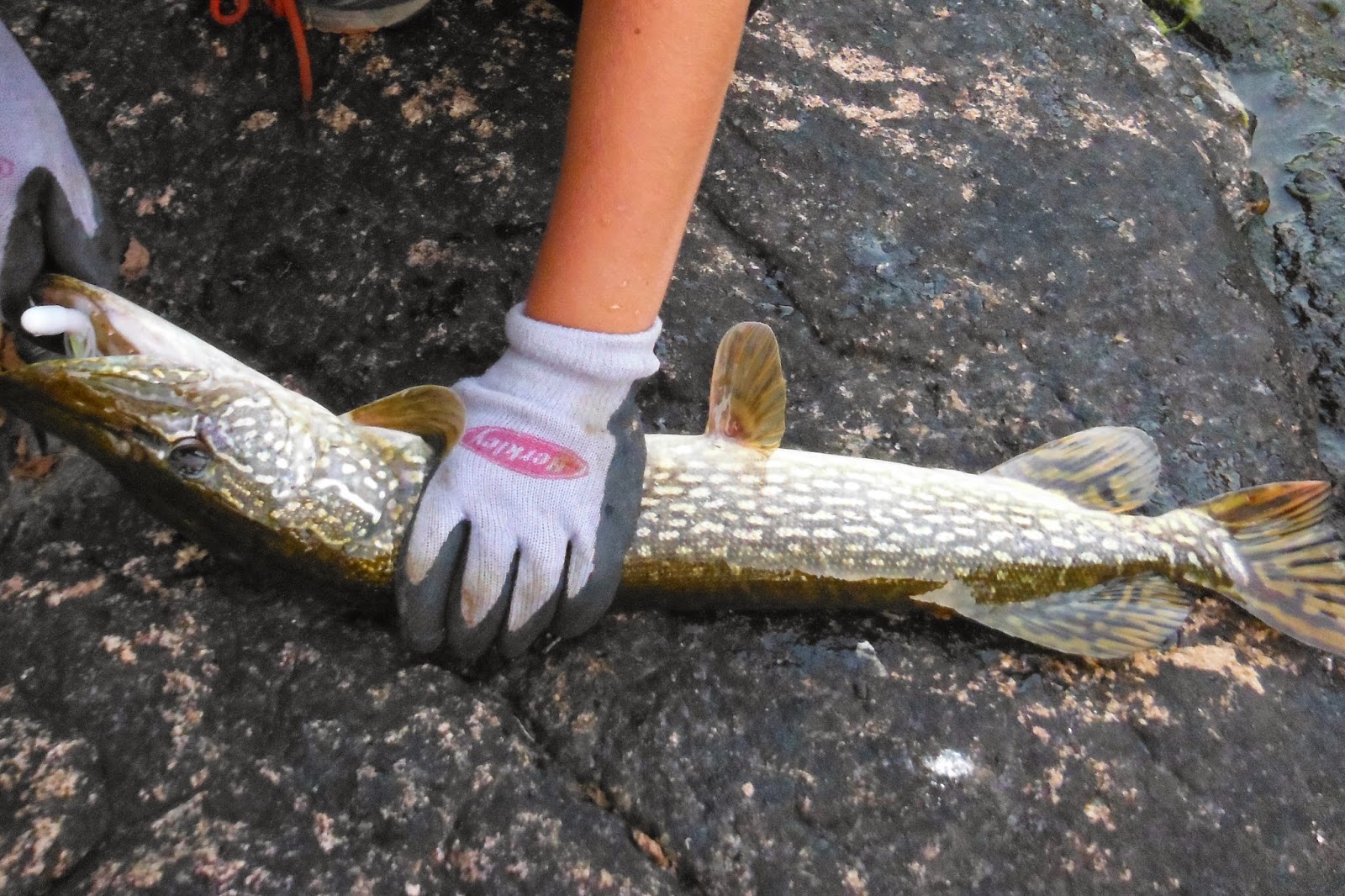 In the middle of the night it started storming. It poured rain and got crazy windy. I learned my 50 dollar Canadian Tire pop up tent was not as waterproof as I thought. The next day we awoke to freezing air and dark clouds on the horizon. He quickly packed up and made our way down a very steep, muddy portage.

We came to Kettle Rapids, the canoes lined it as it was essentially a river-wide hydraulic. I managed to talk Carl into following me through it, the lesson he learned that day is that creekboats are much better suited for gliding over holes than rec kayaks. 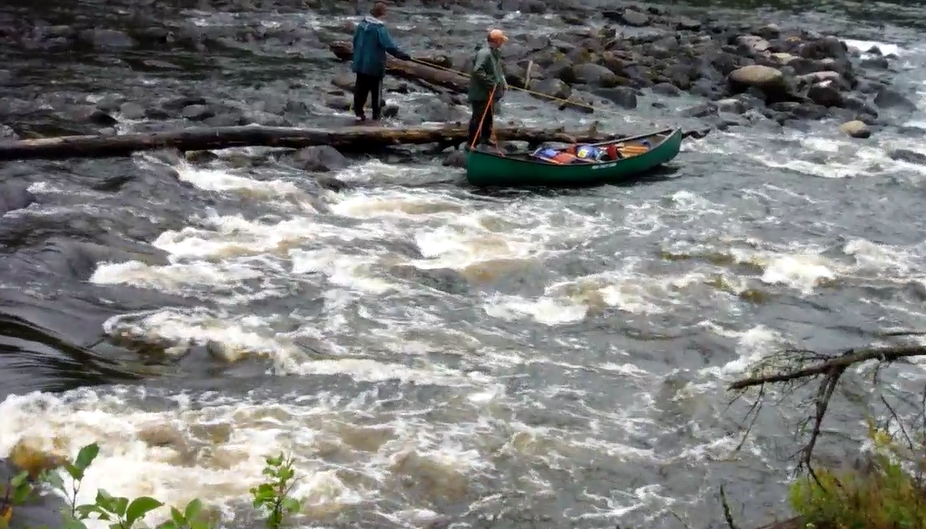 Over the course of the day we came across two major rapids and a small class one. First came Charles Falls. A long, steep slide with a crack in the slide that would damage a kayak pretty quickly. The portage was insanely difficult in the rain. 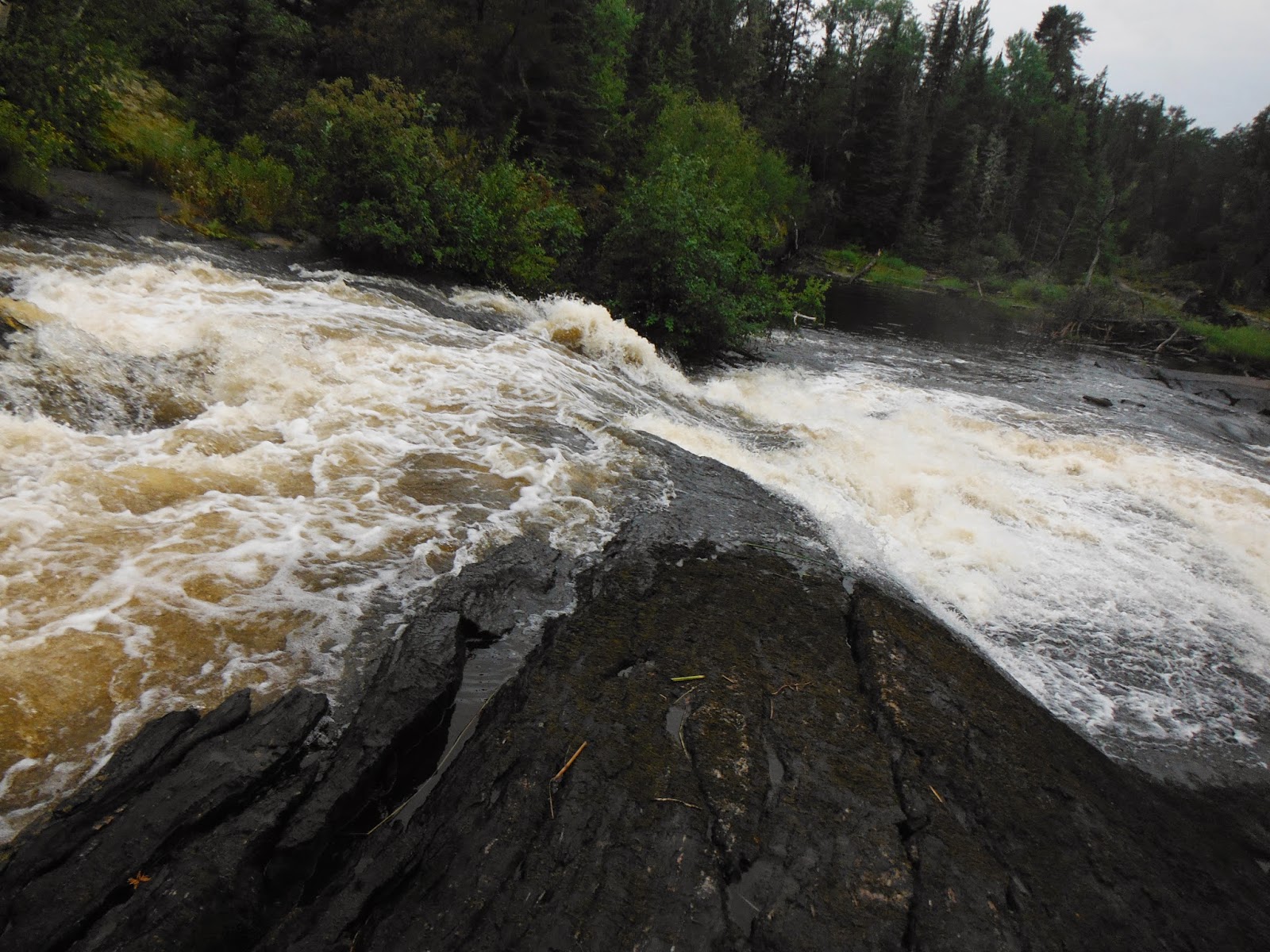 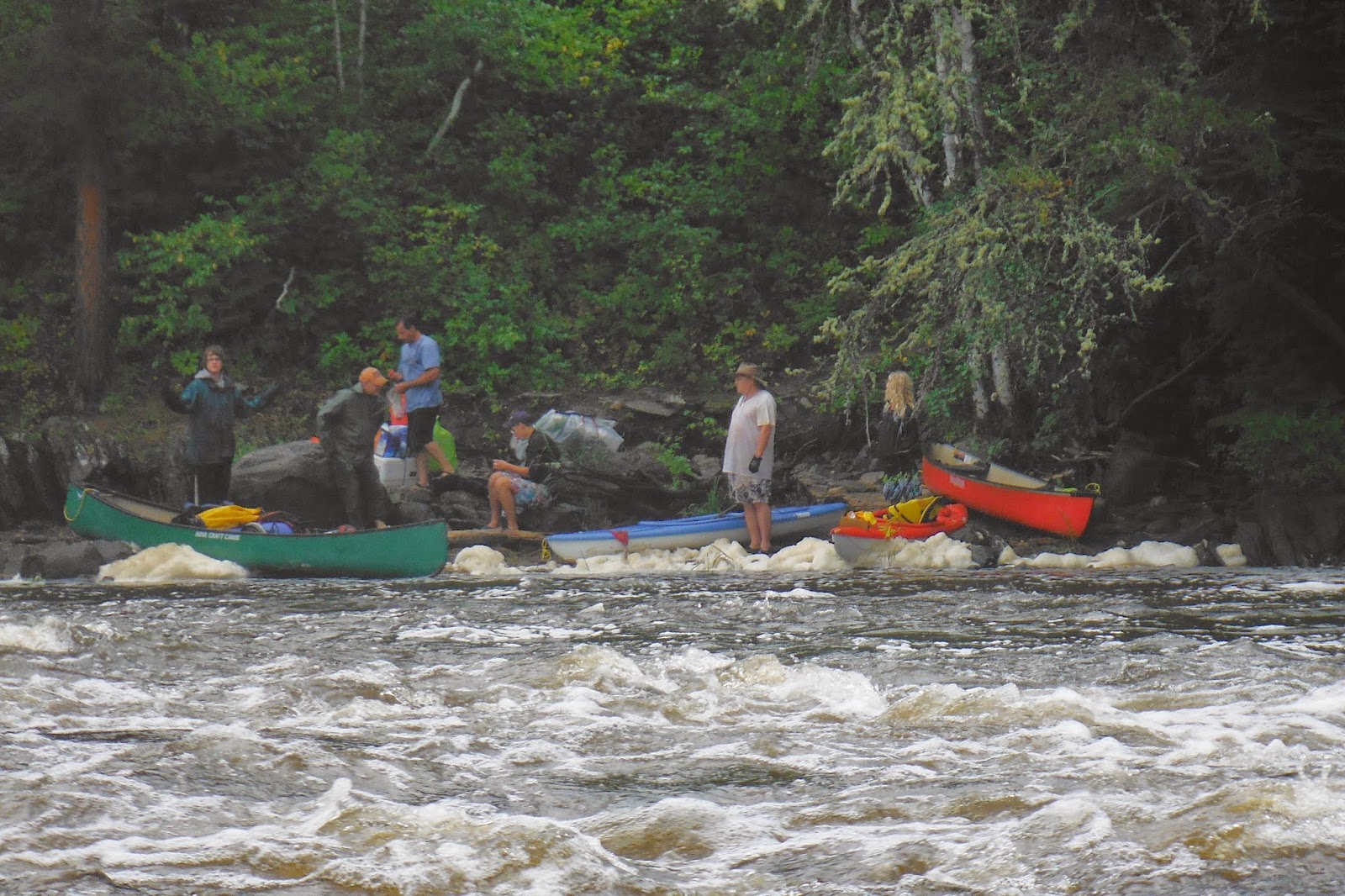 End of the Portage

Pillow Falls was just 2 or 3 km downstream. It was a short, steep portage. The falls looked runnable but, having no previous experience running waterfalls, I decided that days from civilization was not a good place to start. 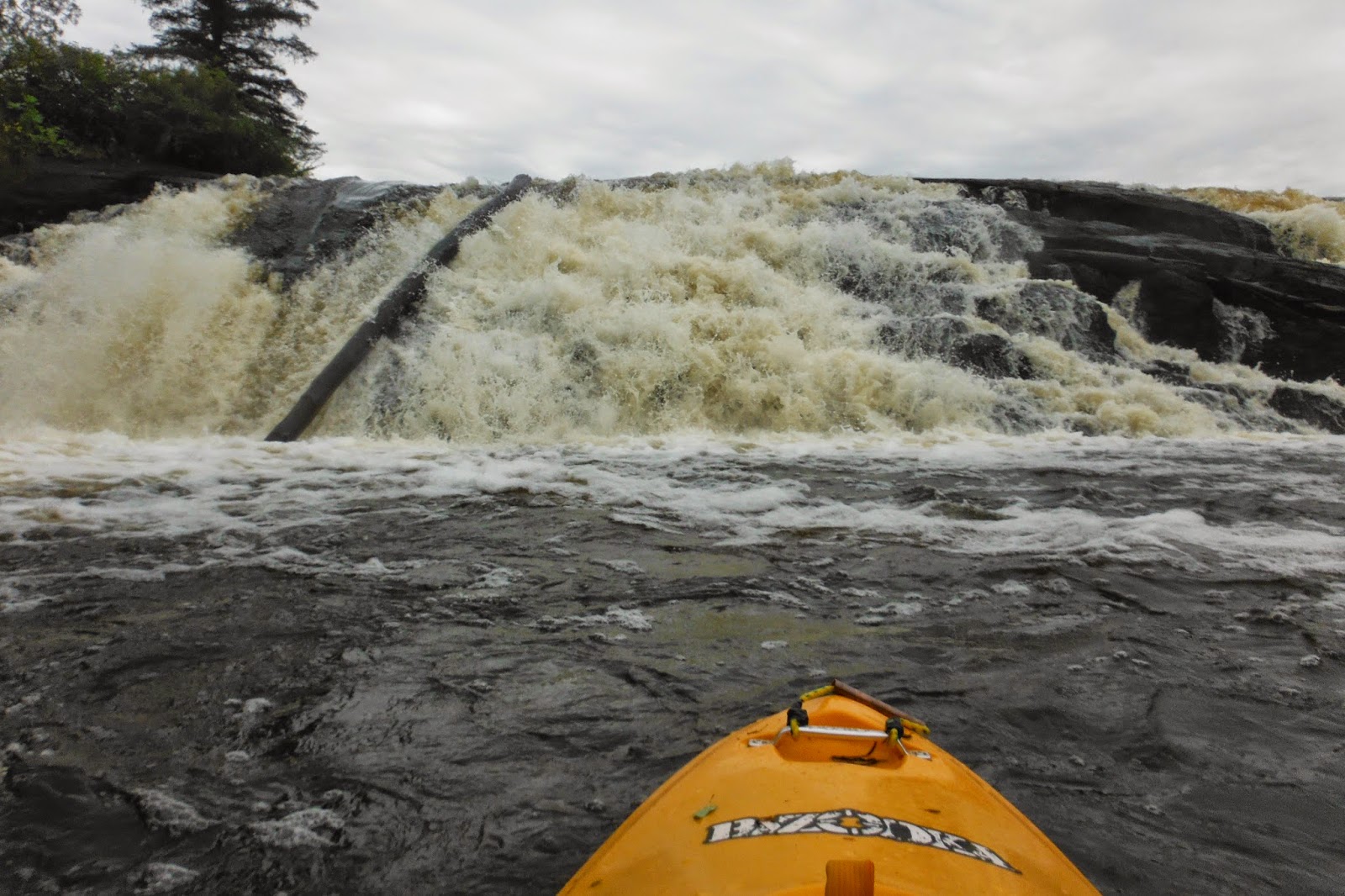 The final rapid before camp was Perry Davis Rapids. A small class I rapid, the canoes lined it, a friend of mine ran it, I ran it and I ran it again with another friends kayak, the temperature was about 10 degrees and so far he was 2 for 2 on swamping in the rapids.

Finally the weather started to clear up as we approached camp. Sand River Falls proved to not only be one of the nicest camps of the trip, it also had some fun rapids that everyone attempted, aside from Carl who was still traumatized from the previous days rapids. 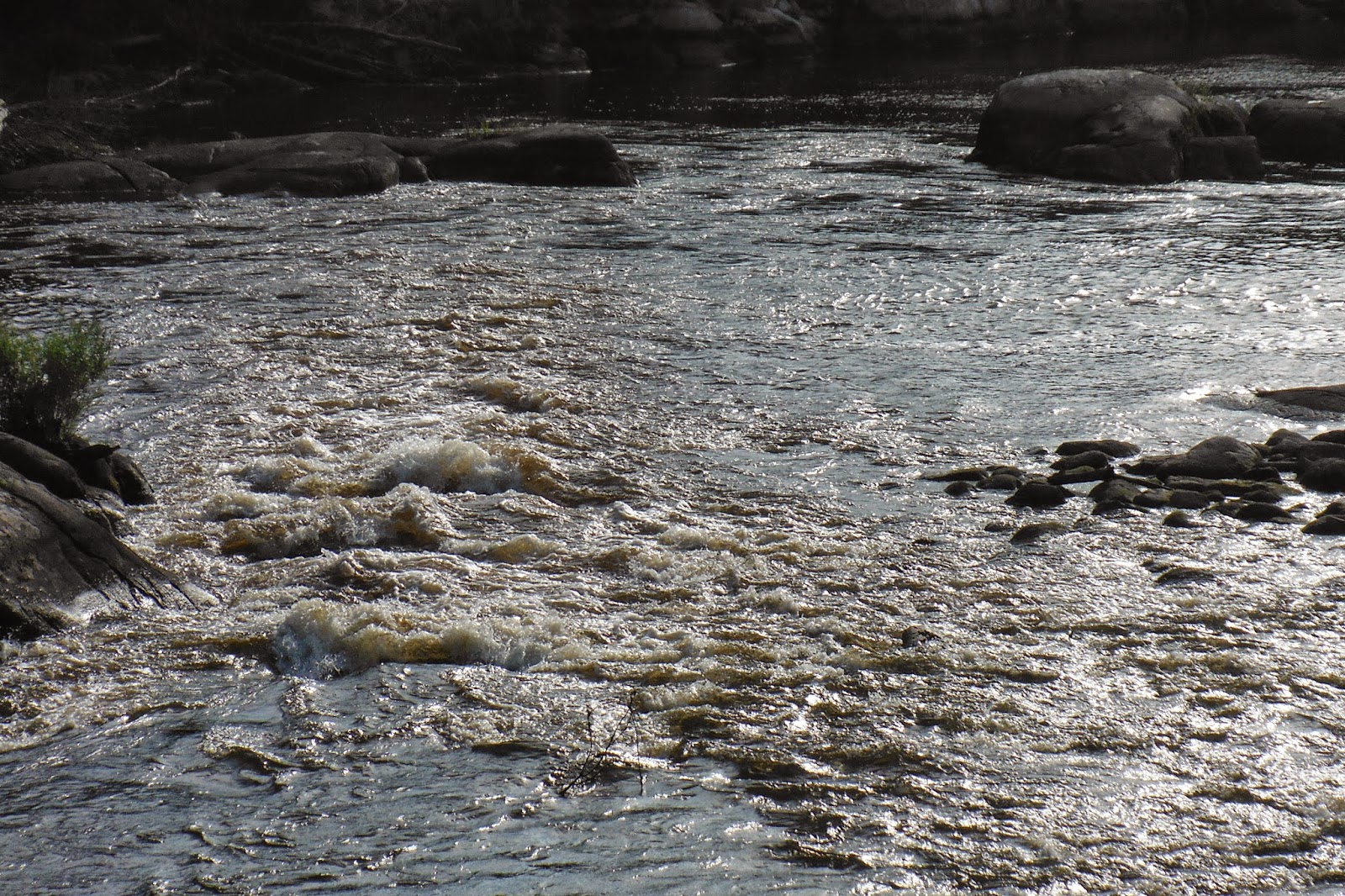 The next day started with 6 small class I rapids, the group got more and more confident. We hit the first biggish rapid of the day and everyone was in. Onion Patch was a long shallow rapid with a hole and then a wave. Everyone made it through except for one, he took a spill in the hydraulic. 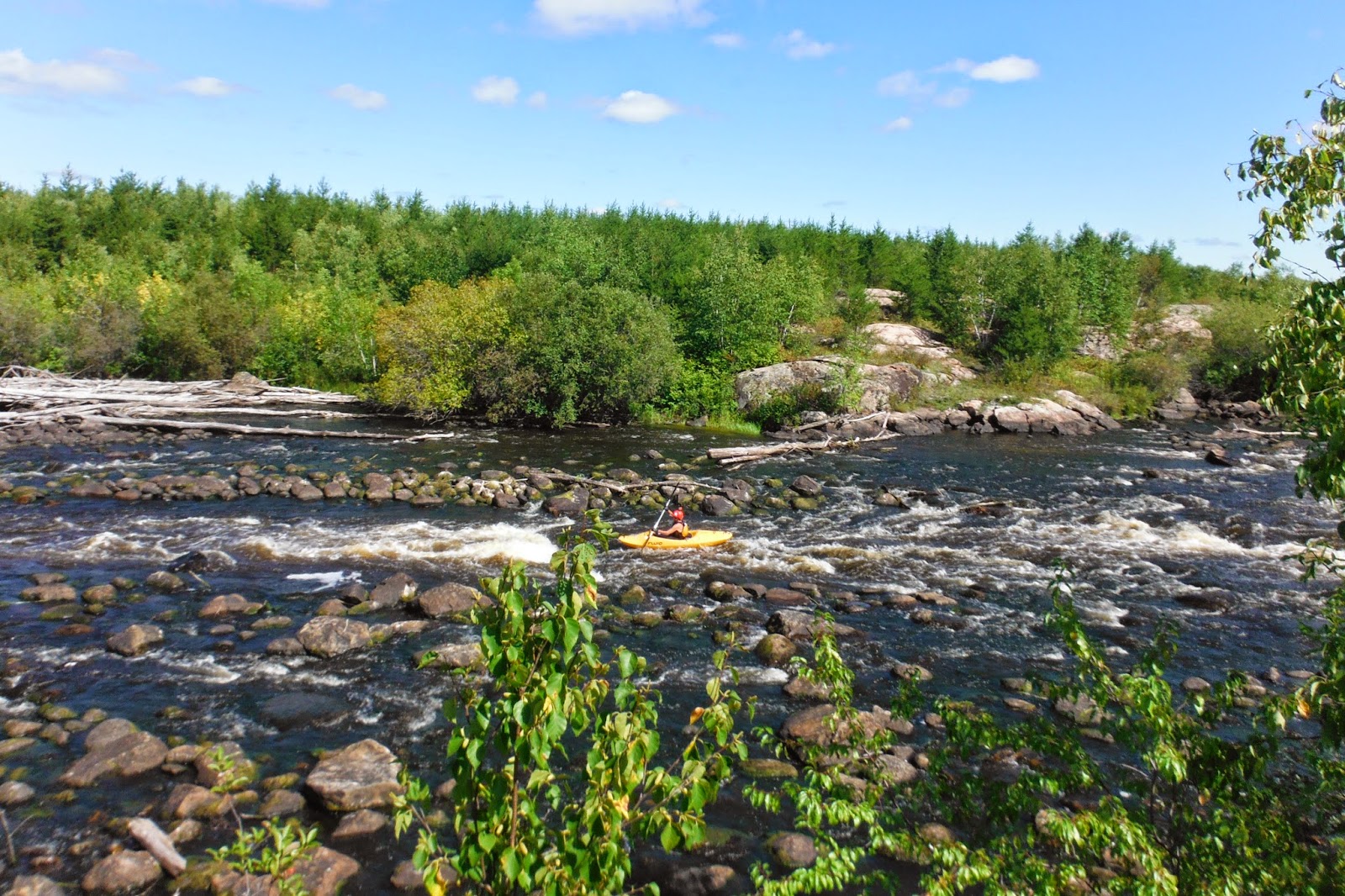 Big Eddy was next, the low water meant a tricky entry so all but one portaged. 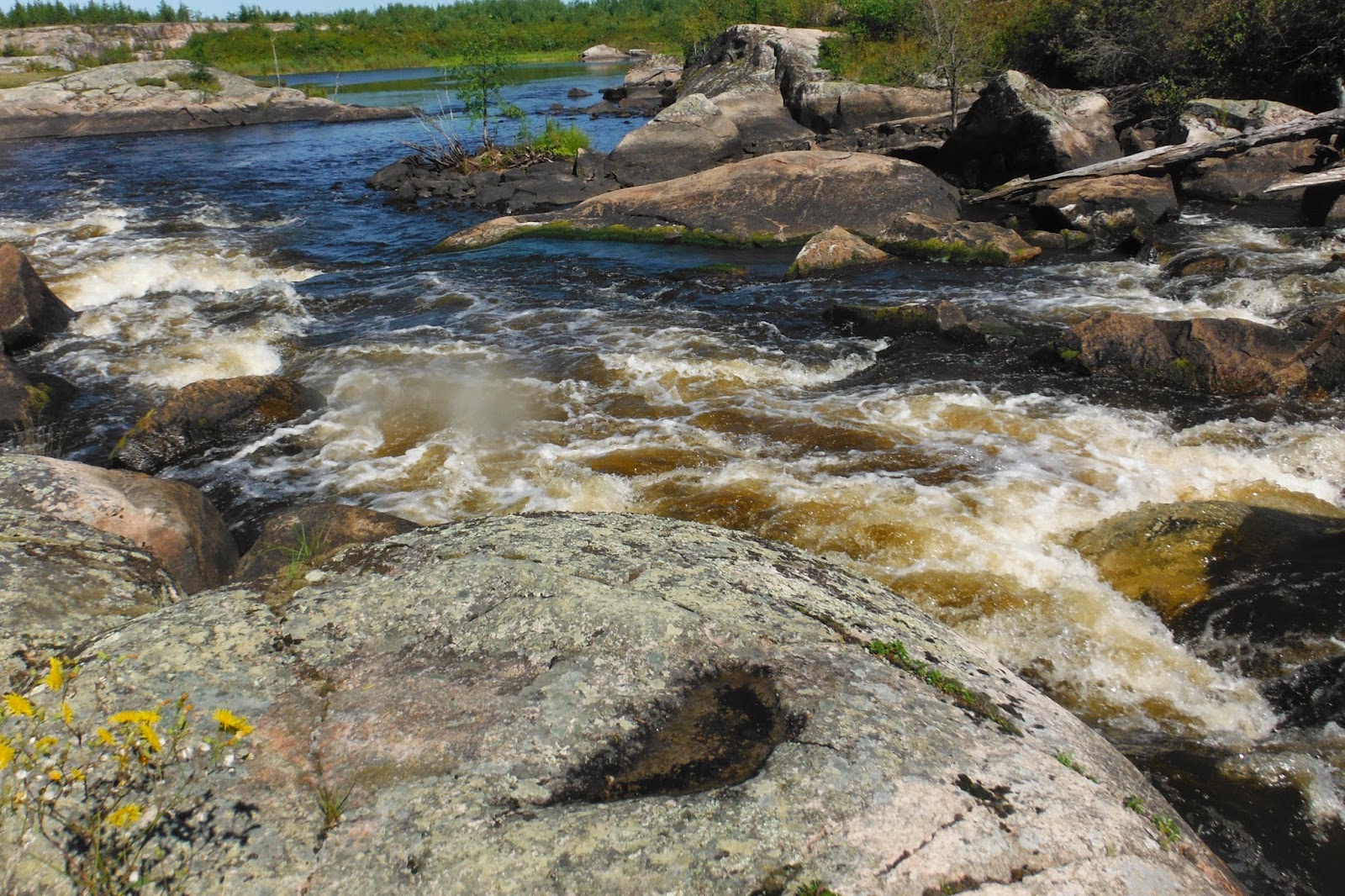 Next on the list was Cascade Falls, marked as un-runnable I decided to give it a try as everyone else portaged. It would have been very difficult in a canoe but a whitewater kayak made it through like nothing, sort of. 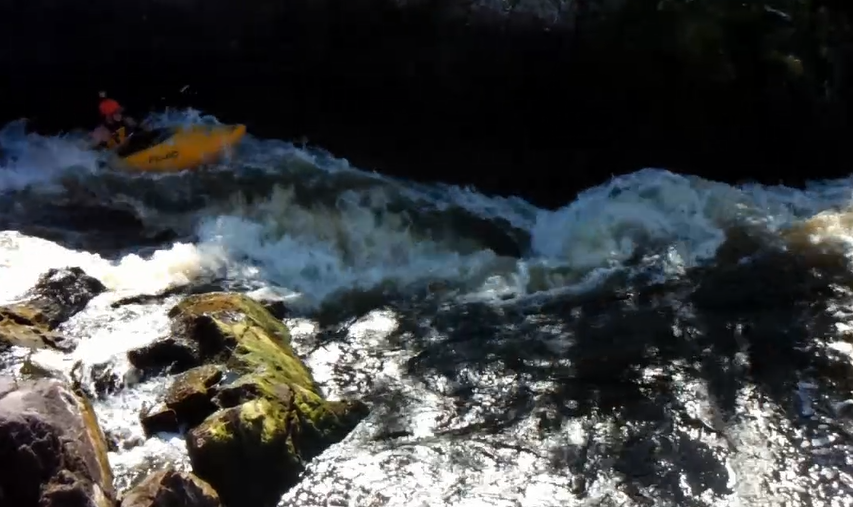 Engineer Rapids was the last of the day. Everyone had a blast on this longish rapid. 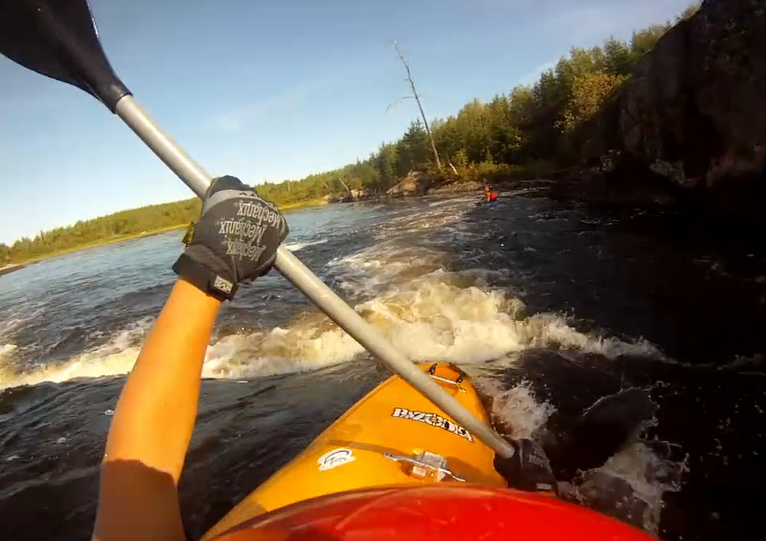 Hydraulic at the end of Engineer

On the third night we camped at Old Woman Falls on an island. Old Woman is definitely runnable at 8 cms. The campsite has little grass and is mostly wood chip covered dirt. The toilet is on river right. 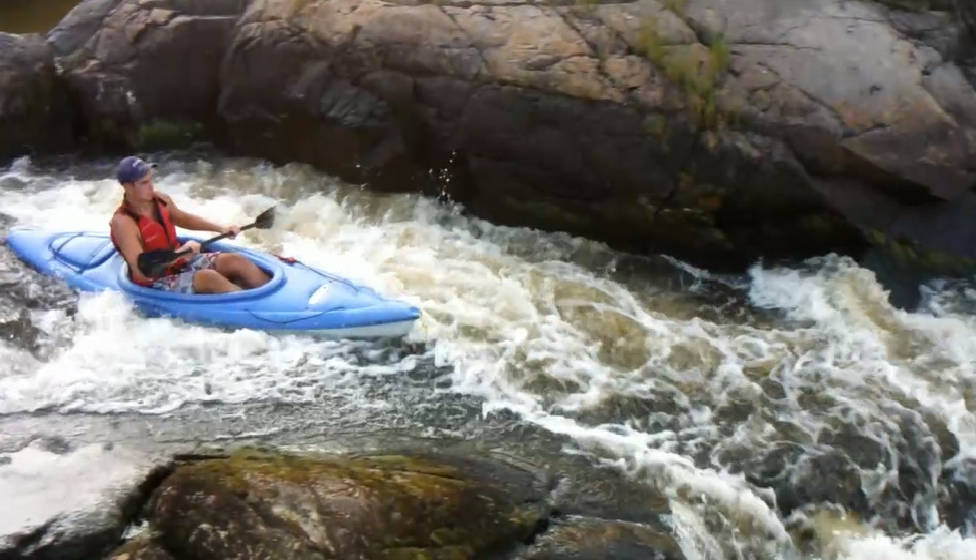 The first rapid of day four was Jack Pine, definitely the longest rapid of the trip, everyone ran everyone succeeded. 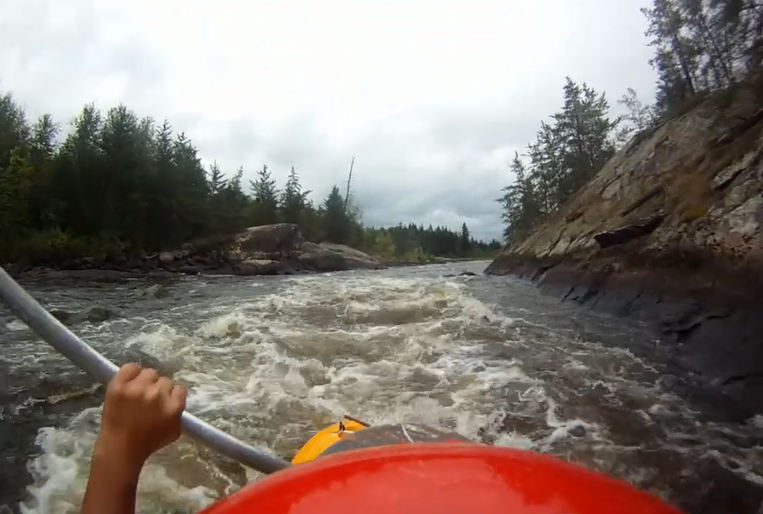 Next was Poplar Rapids, marked as class 4, it looked more like a class 2, I gave it a go and made it though without an issue. 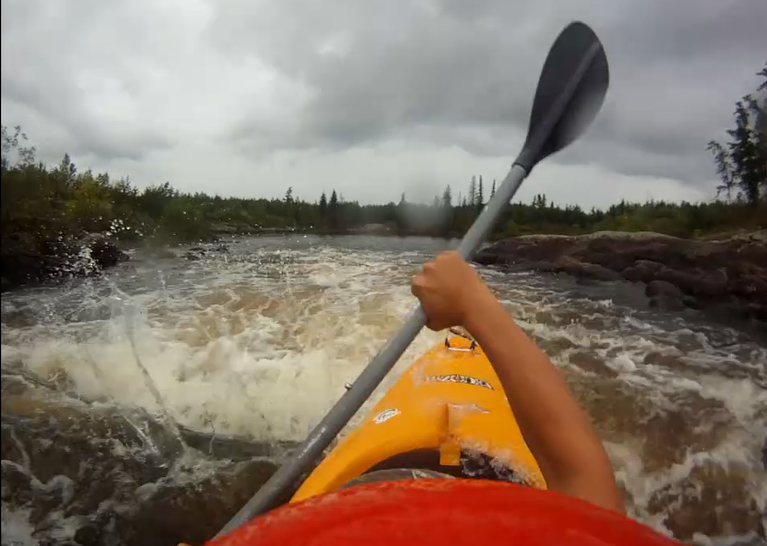 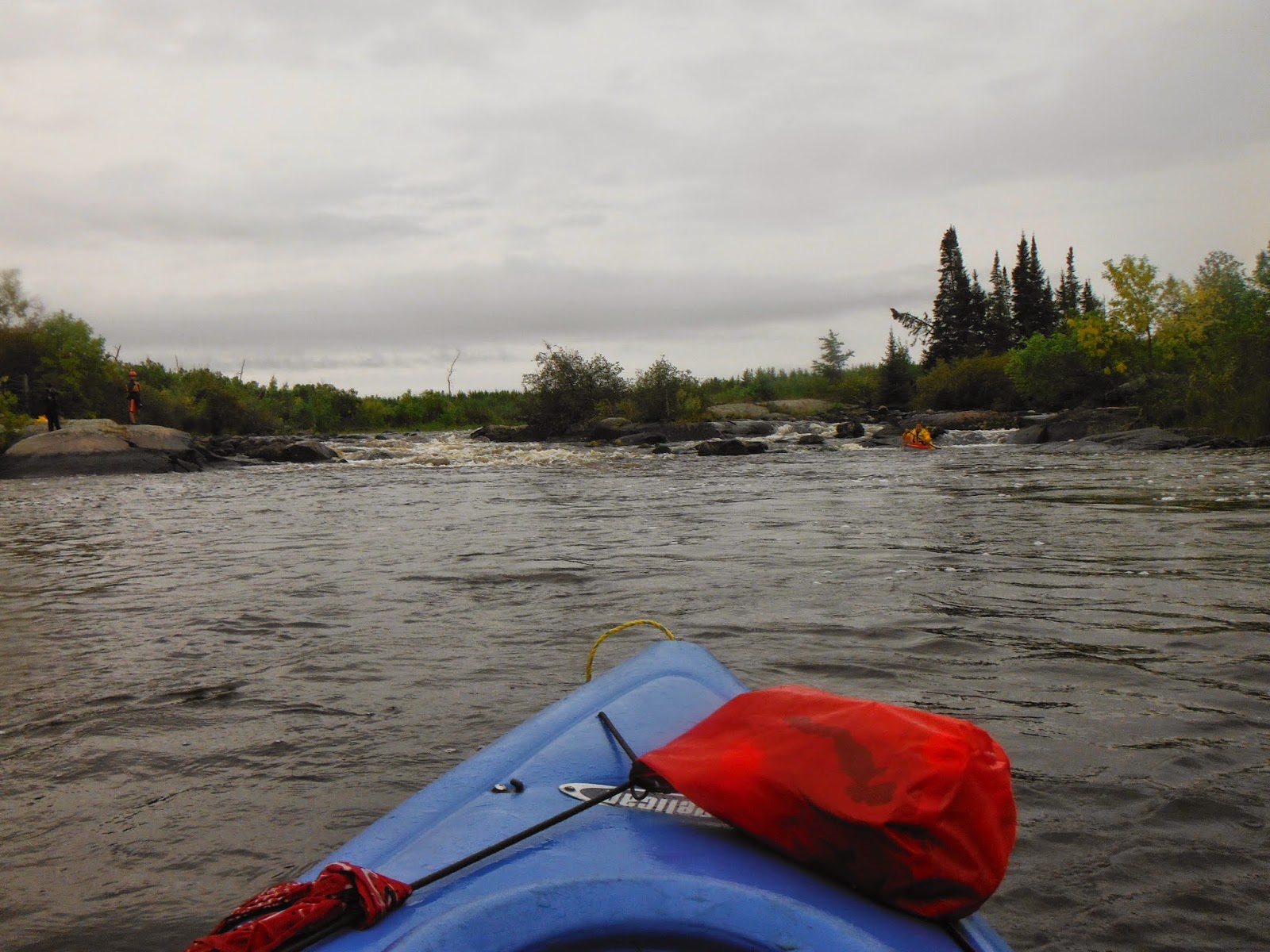 Looking back up at Poplar Rapids

Finally we hit Poplar Falls then paddled back civilization, taking out just above Wood Falls. Everyone was tired and excited to go home. All in all it was an awesome trip. The level was just a bit on the low side for a whitewater kayak and far to low for the canoes. 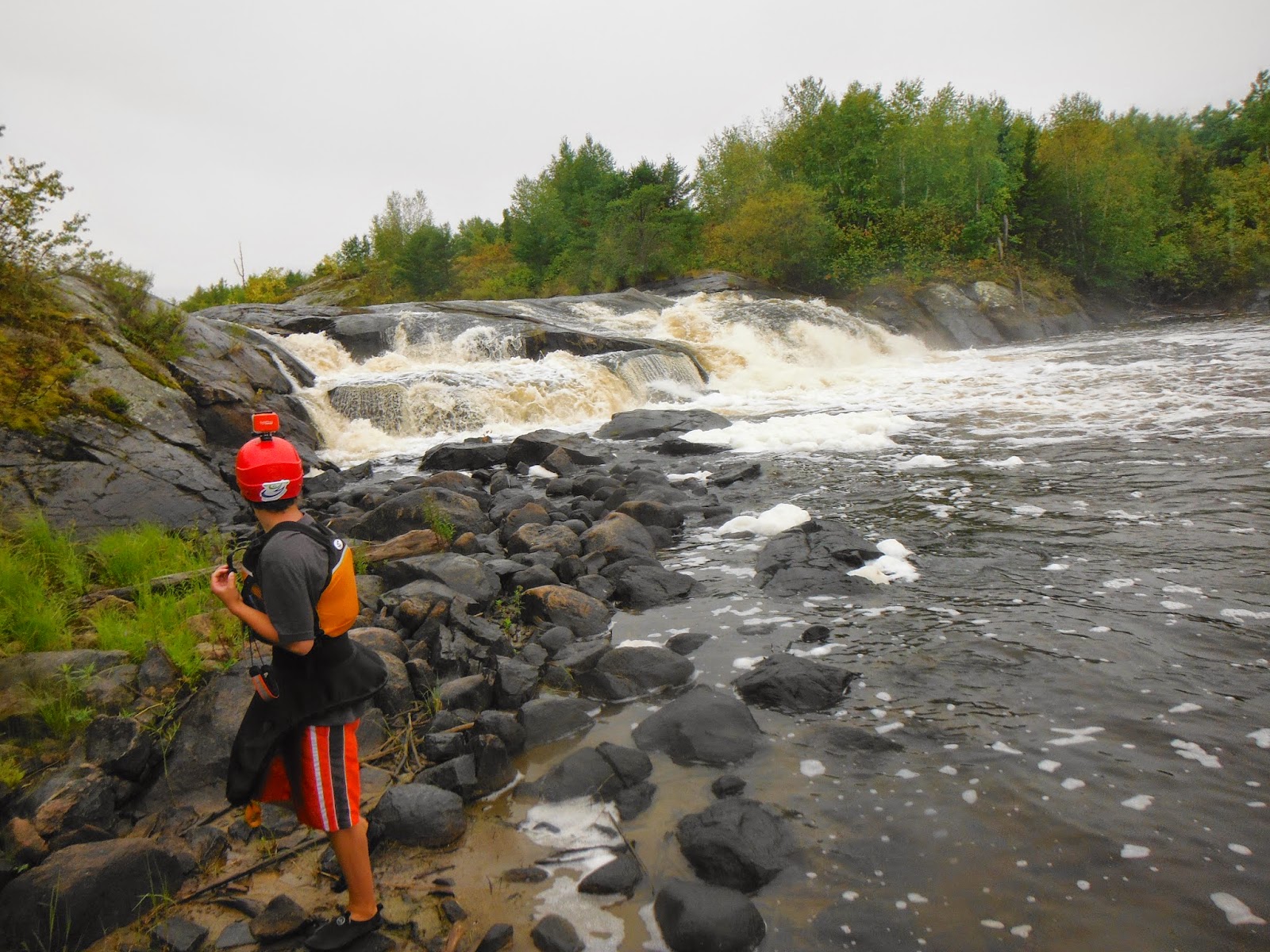 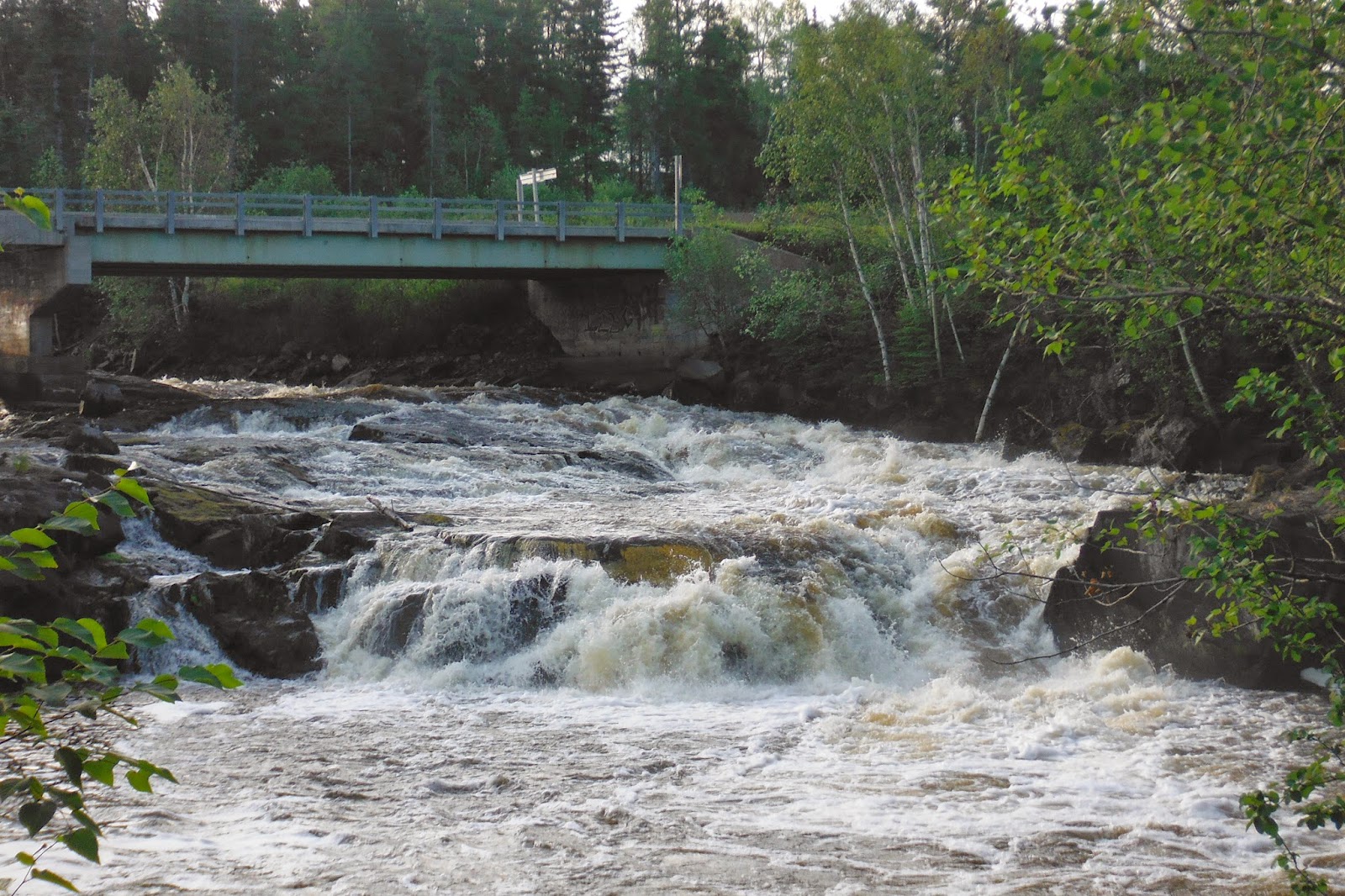